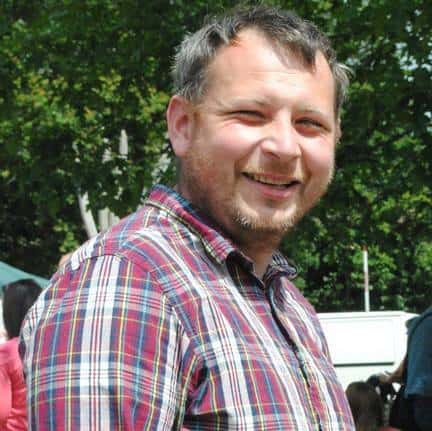 How long were you in the army for?
I joined when I was 16, I come from a strongly military background, I’ve had uncles and grandfathers who were all in the army. I didn’t get much education so this was an opportunity for me. I was in Cyprus, the Falklands, Northern Ireland, the latter was intense, I was part of an eight man team just outside Belfast and we were continually under threat. I was sent to Iraq in 2004. I was in Basra which was scary, I was shot at least 20 times and you are responsible not only for yourself but your team too. You also have to take the decision to shoot at others.

The possibility of IEDs plays on your mind. And just before I went out there, my mum passed away. Which was very hard. I got to the stage where I had a four year old and he was asking me why I was going away. I could no longer answer positively.

How did you find abob?
It came up on my newsfeed on FB. It was the right time. I had a couple of calls with Nathan and then I did BTH. When I was at school I had a mentor who helped me, so I wanted to do that for someone else. I felt as though I had something to offer back to the community. I had seen lots of violence going on around Crawley amongst young men, and I wanted to help to stop it. Even helping one young man would be something.

How was BTH for you?
Intense. It was an eye-opener. I had no idea what I was going to experience. My wife says I’ve turned into a hippie but she also thinks I’ve changed for the better.

I’m much more aware of other people and my surroundings. I wasn’t dealing with stuff from Iraq in BTH but instead it took me back to my school days when I was bullied. I also had a lot of grief stored up that I hadn’t expressed about my mum dying so I got a chance to express that. I never used to cry, these days I can’t even watch Britain’s Got Talent without crying!

What effect did it have on you afterwards?
I used to be entirely selfish. These days, for instance, I’m much more attentive to my wife and to my children. That’s a huge difference. I spend more time talking to them too. I spend time with them actively too. We do things together. That’s a big change.

Have your relationships with men changed?
Yes, I meet up with the abob men in the weekly circle and we can express what we want there without fear of judgement. Also that means the wife doesn’t have to hear it. Also it means I don’t have as much pent up anger. These days I talk to homeless men too, I find out their story, I show them I care what they’re going through. I’m aware that one in 10 ex-service men often ends up homeless so I try to be aware.

Is there a problem re men leaving the services?
I think men often feel very alone when they leave. They miss the camaraderie. I moved down south and I didn’t have anyone around that I knew. Now I’ve got some great male friends in abob. I’ve got a new vocabulary since being part of the abob community, I communicate differently. I love it too in that it’s men from all walks of life.

And you have staffed the Quest?
I haven’t staffed a quest yet but I have staffed a BTH. And found it fascinating to listen to how other men perceived the weekend and asked different questions than when I did mine. But it’s great that there are no barriers, everyone is the same when they’re in a tent.