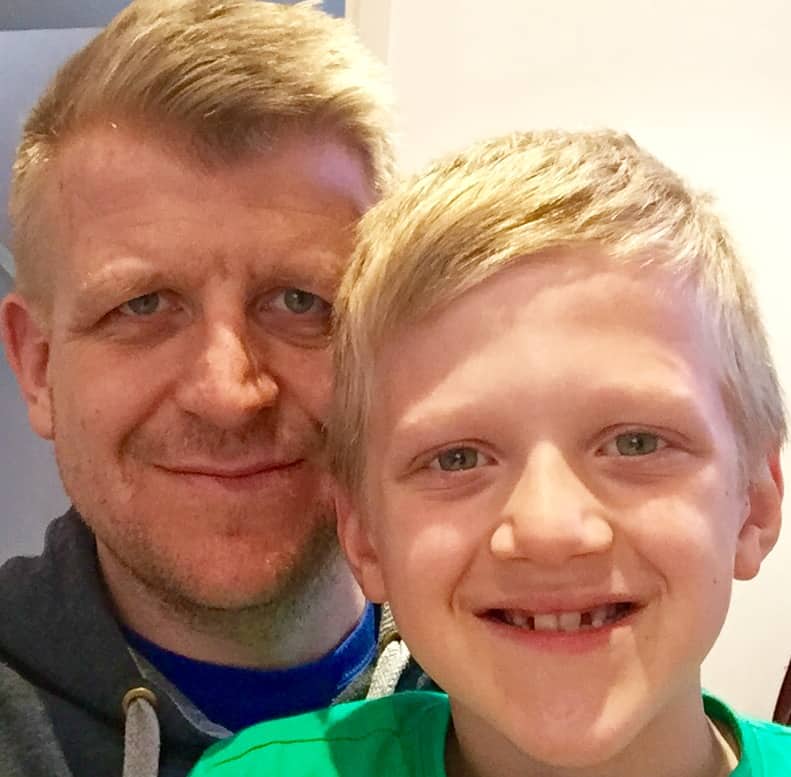 Dave Surridge, 42, Company director, and his eight year old son, Tommy
Why did you become a mentor?
I’m not from Crawley originally but my wife Gemma and I decided to stay after we’d had children. I had a son and Crawley has had quite bad press around its youth and especially for its young male youth. I decided that I would like to be part of changing that in the community, most of all, so that my son Tommy would benefit. It was also a way of meeting other men. I didn’t really know any.

How has being a mentor been for you?
So much more than I expected. It really is like being part of an extended family. The weekly circle where both the older and younger men share their feelings and vulnerabilities, and even get to challenge one another, is very special. It’s also a circle of men for Tommy, he’s been along several times. That’s a huge thing. A community of men for my son. I’ve also learnt tools in this circle that I use in my fathering and in my marriage.

Can you give me an example?
Well I was quite headstrong and a know-it-all. At home with both Gemma and Tommy, when buttons are pressed, I am able to sit down and have a conversation about it, rather than leap into reactions. It’s really incredible to be able to sit down and talk to Tommy. If he’s fed up with me about something, I encourage him to tell me what’s going on and then I discuss it with him. This is something I’ve learnt from the circle with the men.

How many mentees have you had?
I’ve staffed quite a few weekends, whether BTH or the Quest, and I’ve had two mentees. It has all been mind-blowing for me. I used to see these disenfranchised young men around Crawley and I’d look at them and cross the road. Doing this work has made me realise what lies behind how these young men look, and how similar we all are as men. We all have pain and hurt. And how often that pain is turned into destruction if it is not allowed to be expressed. I’ve seen the heartbreak in these young men and their transformations. I’ve seen them at other times talking so positively about their aspirations. I’ve become a lot less judgemental.

How have these experiences affected your fathering?
I would say it’s made me more tolerant and understanding. I’ve also understood how my behaviour can influence my children’s behaviour. I have a daughter, Millie, aged ten as well.. And how important it is for fathers to cuddle their children too. I’m aware of wanting to be the best of myself. We talk things through. We don’t sit on them. Millie and I don’t trigger each other as much as Tommy and I. With her, I realise the most important thing is to acknowledge her as a beautiful young girl.

And with your wife, Gemma?
She saw how much I changed after doing the Beyond The Hero weekend. I’m much calmer and I feel more settled because I am part of a community of men.

And what about Tommy? What have you got out of going to abob?
Tommy ‘ I like going to the woods with the young men. I get to climb trees with them. I also go to the circle sometimes. ‘

And what about you and Tommy?
He benefits from the young men showing him how to climb higher in the trees rather than me waiting underneath telling him to be careful. He’s also been in the check in circle at the beginning of the day when we’re in the woods camping. He’ll say that he’s looking forward to the day’s work ahead.

With him it’s all about enabling him and giving him the space to talk. I want him to know that I’m always there for him to talk to. And not only that, there’s a community of men that he can talk to too.