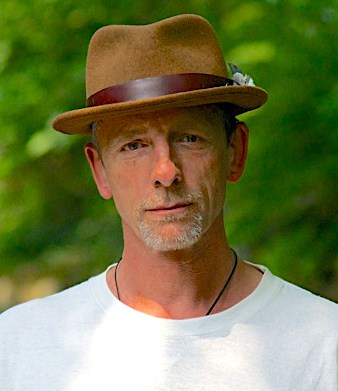 You have been in ABoB a long time?

I joined the original men’s group that used to meet in a loft in Brighton, when the group had been running for about 4 years. As a men’s group, we were all aware that a lot of Brighton’s young men were lost and we wanted to be in service to them. At my first ABoB meetings, I introduced myself as a film maker and suggested that I document what happens to the young men on the rites of passage weekends. That was an idea I had to give up on for quite a few years! It was explained to me how important it was that the processes around the weekends were not revealed, that the potency comes from them stepping into the unknown. Much later in 2017, I did interview many older and younger men, then it became the ABoB film ‘It Works’.

When did you do the ‘Beyond the Hero’ weekend?

Funnily enough, I didn’t do my BTH until six years after I joined ABOB, which is very unusual. At that time there were many men joining and only a couple of initiations a year, also I go away a lot working and it just turned out that way. By the time of my weekend, I was so ready, I got to really express a lot of my anger and grief about being bullied at school. I am an ex-actor, so I throw myself into the processes and I think the next village probably heard my shouting. You see, ABOB creates a very strong container of trust ,so these strong emotions can be safely explored. I was motivated by the idea that I could help younger men who had gone through what I went through. Hurt boys become hurt men and hurt other people. Here is a safe space for us all to find some healing.

What else attracts you to ABoB’s philosophy?

That no one person is the boss. We are all trained to be leaders of ourselves. The young men are so empowered to find that part of themselves that knows what needs to happen in their lives. That is the gold that is in the wound. That all of us men get to understand what the sovereign space is inside us.

You’ve had several mentees over the years?

Yes and all of them have taught me different things. With the first mentee, I learnt that it was not up to me to give advice, but rather to ask questions that supports him to work out what he needs to do. Mentoring has to happen from the side! If you make it all too obvious, it can be rejected. Then from the second one, I learnt not to take personally whatever happens. That it’s not about me. If I let go of the need to be a good mentor, then it all gets much easier for us both. Really, mentoring is about being willing to listen.

What’s different about ABoB as an organisation?

I think we are genuinely interested in the younger men. We’re not paid for doing what we do, that makes a huge difference. The young men often can’t believe this. It makes the link between us so authentic. They’ve often had experiences of the professionals talking down to them. We’re different. We’re part of a village of men who genuinely want to support them and do. We also live in the same ‘village’ so we see them around town and talk to them. That all makes us trustworthy. And often we’ve been through the same problems as the younger men and unlike the professionals, we will share our stories, our struggles and our feelings.

How do you see ABoB’s future?

I’d like to see us including women more, so they understand what we do. Many women look after young men at risk and if we reveal more of what we do, they could encourage them to trust us enough, to come on a weekend. I’d like there to be a Circle of Sisters too. I’m sure they could learn a lot from ABoB and then decide what they need to do, to help young women look at their own lives and decide what needs to happen to make our villages a safe place to be too.